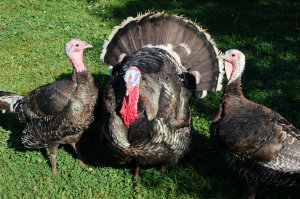 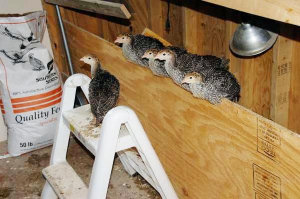 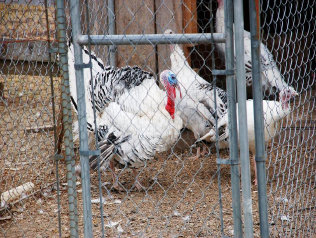 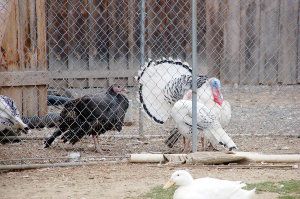 Since we've been farming, we had several flocks of turkeys for the holidays. The most common breed for eating has been the Broad Breasted Bronze and White turkeys which our customers loved. However there is a slight problem with this breed. They get large very quickly and the hatcheries sell out early. This forces us to buy early. Turkeys eat large amounts of feed and grow quickly so by Thanksgiving they are huge. Some of them in excess of 35 pounds, our largest being 40+ pounds. This is way to big to fit in the oven, so in looking for a solution to this problem, we came across the Heritage breed turkeys, which are beginning to catch on across the nation. The Heritage Breed is and will be a lot smaller than the broad breasted variety...but the taste is reported to be exquisite. With that in mind, we bought nine Royal Palm Heritage birds, but through a bad business decision, we sold five poults...two toms and three females to a friend down the road. We kept four...a male and three females. Our plan was to harvest and sell their eggs until hatching season and then we would incubate enough to build a nice flock, selling the males for the holidays and keeping the females for egg production...repeating the procedure yearly. That way we would have new female egg layers and sell males and older females for Thanksgiving and Christmas. That was what we were trying to achieve with the Heritage turkeys, but our customers weren't happy with their smaller size, so now they are for egg production only and we are back to selling Broad Breasted Whites again for the holidays.
It appears that this is what our customers want and they order their turkeys ahead...during the summer and fall months...so we are ordering them as late as possible to control their growth rate to achiever 20 - 30 lb. birds. 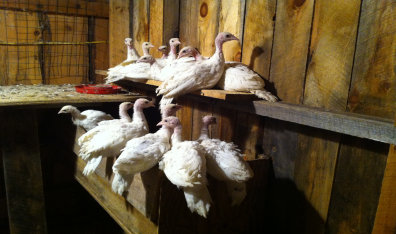 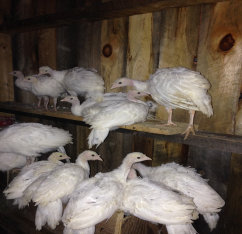 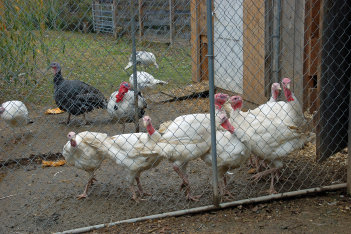